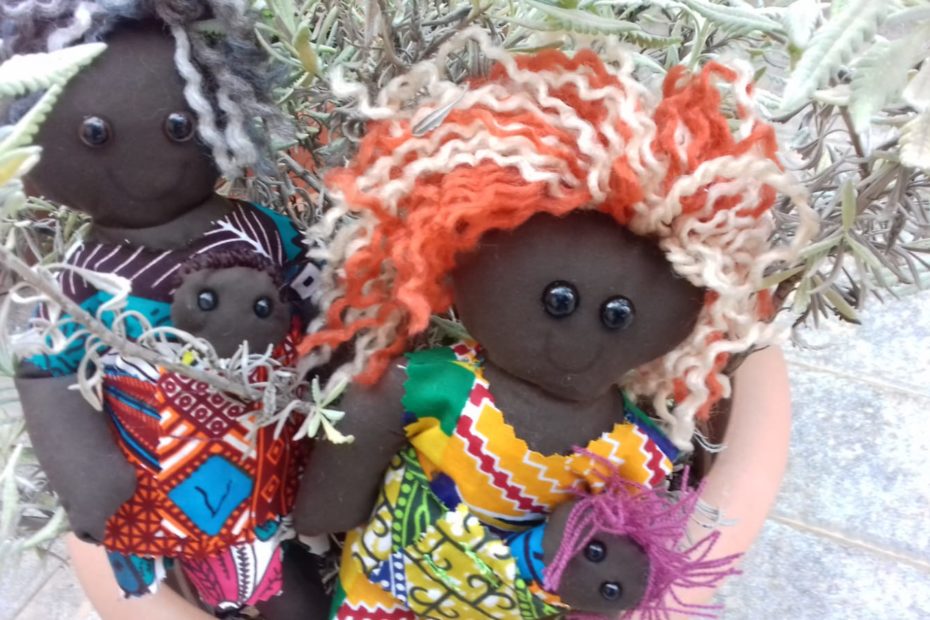 Many years ago in the Ashanti village of Ghana, the prettiest girl in the village, whose name was Akwa (because she was born on Wednesday) couldn’t stop crying. People didn’t understand her, she was the prettiest, married to the most handsome boy and had all the gold she wanted. But for Akwa, the beauty and the richness were not the most important thing, what she really wanted was to have a child.

Finally, she went to ask the wizard of the village who recommended her to find a trunk of a tree and cut it until it had the shape of a girl. This girl needed to have everything she desired for her daughter to have. Once she had it, she had to treat it and love it as if it was her child. Akwa found this answer weird but on her way home she found a mango trunk that she liked so much she took it with her. Once at home she started cutting it the way the wizard asked her to do: she made her a big head with a big forehead because she wanted her to be able to solve all the troubles in her life. She also made her long neck, symbol of female beauty. She made her only one leg, but a big strong one because she wanted her to touch the Earth. And finally, and because she wanted it to be a girl, she made her two breasts and one vagina. She had already had her daughter… and started loving and taking care of her. Every morning, after breastfeeding her, she put her inside her ntoma (clothes where they carry the babies in Africa) and they went for a walk. If her daughter was sleepy, she sang her songs until she slept, if she was crying she whispered her in the ear until she smiles and every night she bathed her inside the biggest cauldron she had. She hugged her, touched her and talked to her as if it was her daughter and she did so day after day, hour after hour, minute after minute. People from the village had fun of her and said she was getting mad. But Akwa didn’t listen and she only wsa thinking of taking care of her daughter who wasn’t crying anymore, she only smiled and sang.

Until the day that Akwa’s belly was growing… everyday bigger. Akwa was pregnant and in a few days she gave birth to a girl just as she imagined. Women and men from the village started saying: Wei yɛ Akwa ba which means “this is Akwa’s daughter” and this is how the name Akwa ba (Akwa daughter) remained. As she was a very desired girl, until that moment when someone comes to Ghana and they welcome you they say” Akwaaba” which means something like “Welcome”. Moreover, the statue (trunk tree) became a fertility doll, the female fecundity represents the basis of the Ashanti society, symbol of survival and continuity of a community. Women who want to be pregnant wear this Akwaba because she can help them, protect them from the pregnancy and the baby in the first days of their life.

Ashantis from Ghana are a matrilineal society, it means that the newness of a member of a family is done by the mother, the family name, the goods and the inheritance come from the mother; women have a key role in this society. As in every society, fertility has algo a big importance as the first days of the life of a baby. Ashantis have a protector of this fertility: Akwaba, which at the same time is represented with the femenine symbol, as Tanit (cartagines), Afrodita (Greeks) and Juno (Romans). All of them are represented with the symbol, with some variations, that nowadays feminism has. Here you have the legend of Akwaba which represents everything we have told you.

We use cookies on our website to give you the most relevant experience by remembering your preferences and repeat visits. By clicking “Accept”, you consent to the use of ALL the cookies.
Cookie settingsACCEPT
Manage consent

This website uses cookies to improve your experience while you navigate through the website. Out of these, the cookies that are categorized as necessary are stored on your browser as they are essential for the working of basic functionalities of the website. We also use third-party cookies that help us analyze and understand how you use this website. These cookies will be stored in your browser only with your consent. You also have the option to opt-out of these cookies. But opting out of some of these cookies may affect your browsing experience.
Necessary Sempre activat

Any cookies that may not be particularly necessary for the website to function and is used specifically to collect user personal data via analytics, ads, other embedded contents are termed as non-necessary cookies. It is mandatory to procure user consent prior to running these cookies on your website.